Day two, first full day in Taiwan! I woke up extra early to take a peaceful morning walk around our hotel.

We bought some fresh mango juice (this became a recurring event throughout our trip.. can’t resist!) and also some buns and radish cake for breakfast and ate it at a nearby park.

Afterwards, we met up with our friend to go to Jiufen, an old mining town now well-known for being the inspiration behind the Ghibli movie Spirited Away.

We took a long bus ride all the way there. There are actually a lot of pushy men that offer to bring you there much quicker for a higher price in their cars, but we weren’t sure about its safety and weren’t comfortable with it in a foreign country, so we just went with the bus.

At one point, we realized that we wanted to stay until night time in order to see the tea house lit up. So from then on, we decided to just roam around the entire town, away from the bustling streets of shops and tourists, in order to kill time and enjoy the scenery. 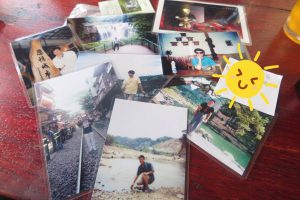 One really odd and interesting thing that happened as we were walking was a man actually saw that we were trying to take a photo of the four of us, so he offered to help take it. He was quite friendly, and was delighted to find out that I was Japanese and started speaking to me in some Japanese that he knew. He then proceeded to tell me he had an omiyage, a gift, for me, and pulled out some photos out of his backpack. They were mostly photos of him when he was much younger in some popular spots in Taiwan. I thought he was just showing them to us, but he insisted that I take them and not in a position to refuse, I politely thanked him and accepted them. He also wanted all of us to take a photo together on my camera, so after I took a photo of all of us, he said goodbye and left. We were looking at them again later on, still confused about the whole encounter, and there was a small piece of paper with what seems to be a name and an address (covered in the photo above). The view of the grand teahouse was definitely worth the many hours we spent there. With all of the tourists pushing through each other for all of the photos and such, it really reminded me of the active creatures in the movie at the bathhouse.

It’s one of the most popular places to visit in Taiwan for a reason, and I’d definitely recommend a day trip here (especially if you’re a fan of Spirited Away!) 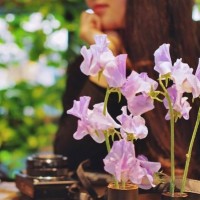